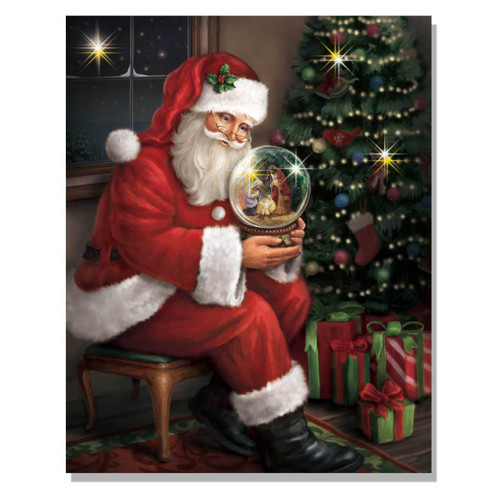 Hover over main image to zoom

64273-C "Santa's Favorite Gift: A Nativity Snow Globe" is a 16" x 20" canvas print with LED timered lights built inside that create a magical twinkling glow as they shine through the canvas. Each canvas requires 2 AA batteries (not included). The timer function on the canvas is set for 6 hours. The lights stay on for 6 hours then shut off automatically. They come back on again 18 hours later, which is the same time you turned them on the first day. In the coming days, the lights will be on every day at the same time when you turned the switch on the first day and then off again 6 hours later. The canvas shows Santa looking into a snow globe with a nativity scene inside of it. There is a star outside the window, and a Christmas tree with presents under it in this lighted canvas.

This product hasn't received any reviews yet. Be the first to review this product!

All prices are in USD. © 2021 Trendy Decor 4 U. Sitemap | Shopping Cart Software by BigCommerce